So, TFT are now aware that Amber Ops have accessed their website with level 6 security clearance. I screengrabbed and posted the pages here so that everyone can learn about TFT just in case the site is taken down. 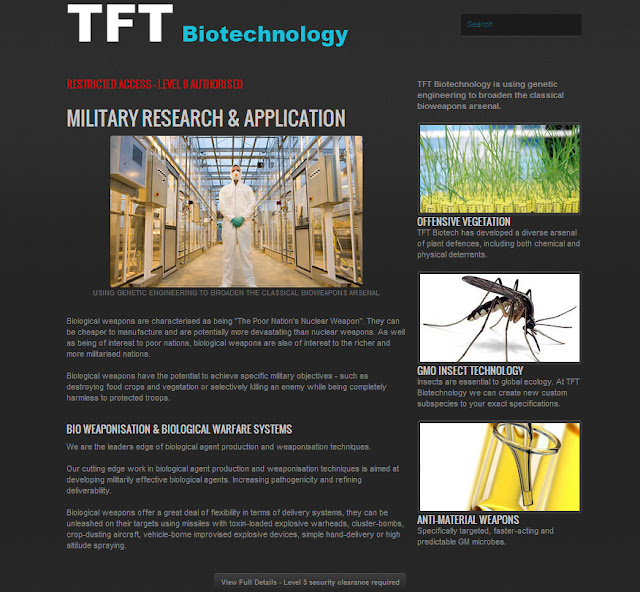 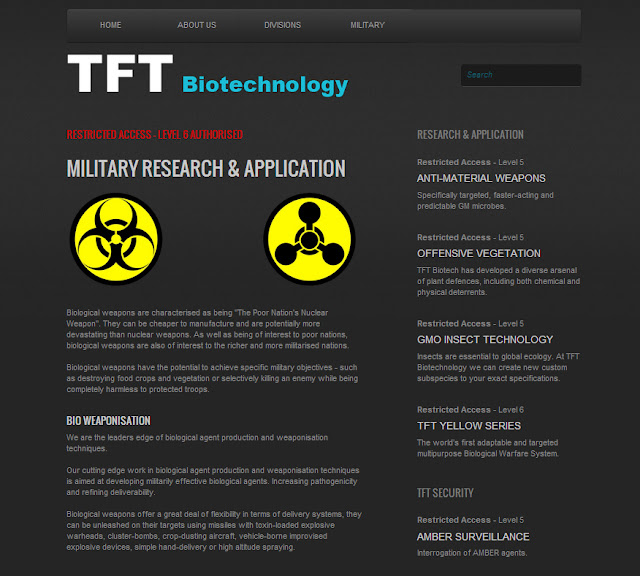 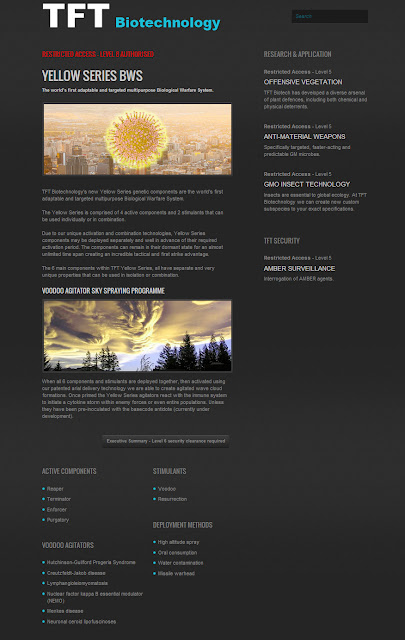 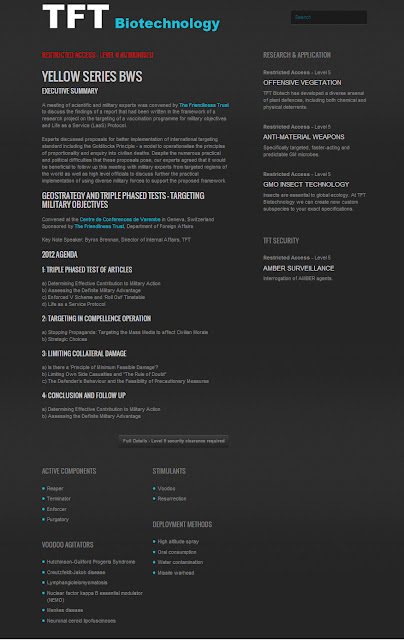 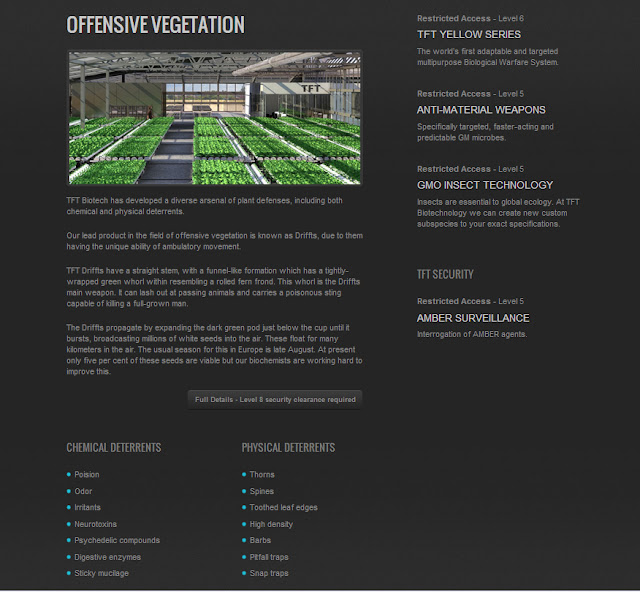 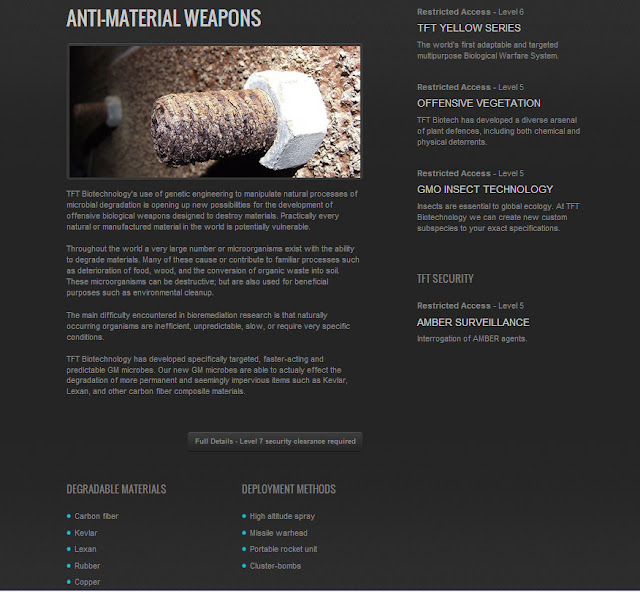 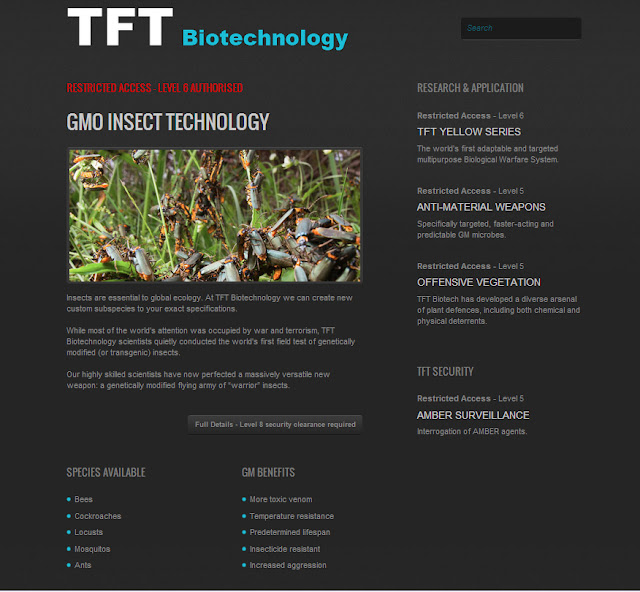 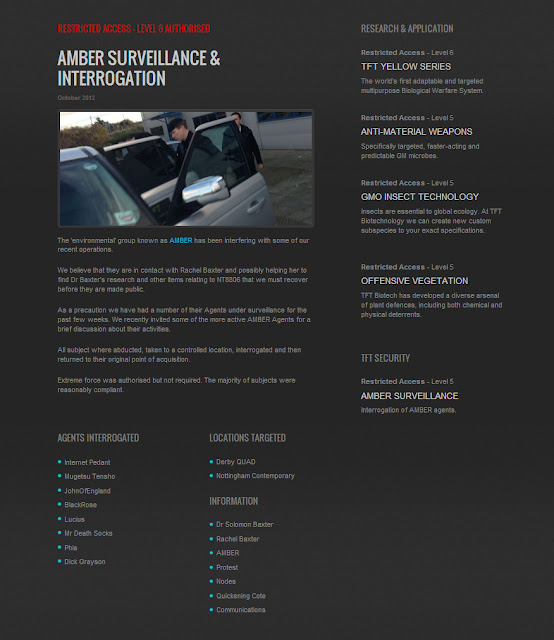 I figured out the combination to the safe and opened up the one in Derby Quad. Inside was a short video from Dr Baxter:


There was also some of empty phials with the yellow snow qr code lable, and details of Suzan Battlers log in to the military section of the TFT Biotech website with phone numbers for numerous TFT employees. 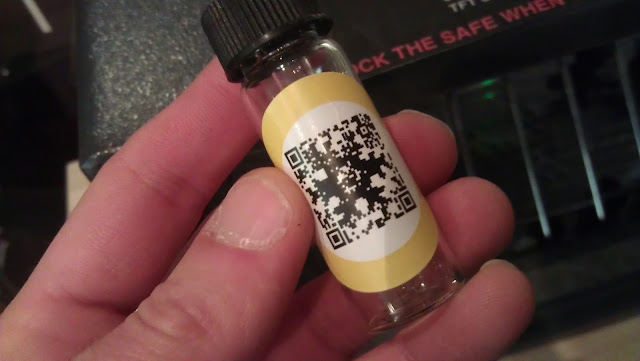 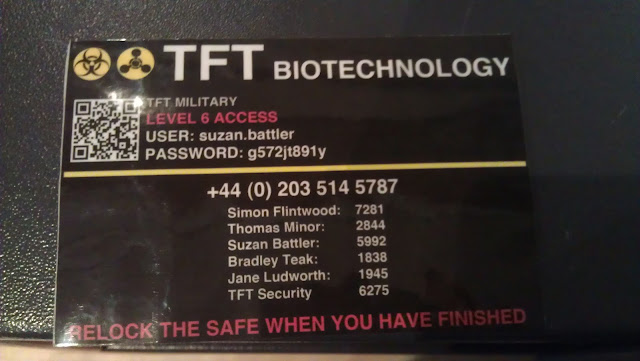 Once people had learnt I had cracked the code, I was inundated with tweets and DMs with requests for the combination, and was alerted via text that my phone number had been posted publicly on facebook, so, fearing for my safety, I shared the combination so that if anything happened to me, the information would be out there.

Since the safes have been opened, I've noticed that other safes have seemingly contained more documents than the Derby safe - is there a traitor amongst AmberOps who got there first?
Posted by G-Dog at 08:34 No comments:

Not sure who to trust any more...

This is getting weirder..

I accepted an assignment last week to meet up with Rachel to collect information - or so I thought... She seemed more interested in asking me questions than giving me info which seemed suspicious, not asking the question but the persistence and asking if I knew anything else.

I've been keeping an eye on the other agents blogs and it seems that I'm not alone in wondering who to trust.

Another assignment was issued for today, which I didn't accept but went along to observe. I checked in to the node to see what info was there and agents were being directed to look for a man in a bowler hat with warnings of sighting of a TFT landrover in the area. Whilst assessing the situation, another (presumed) agent approached the behatted man, they disappeared out of sight then went outside where the agent was bundled into a TFT vehicle. The Amber informant (his handle on the node) did nothing to intervene... was this a trap?

Not sure who to trust. Here are some photos of today's events: 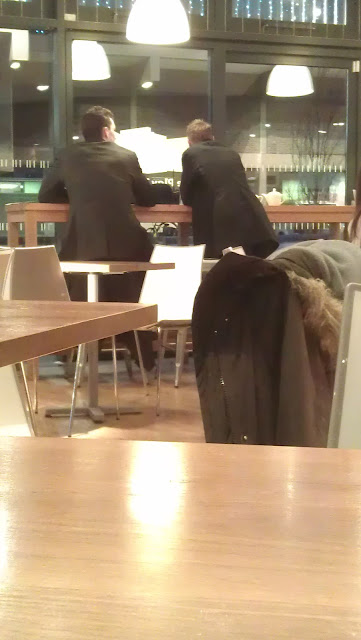 The man on the left was the 'hat man' who was joined by a second, then third suited man. 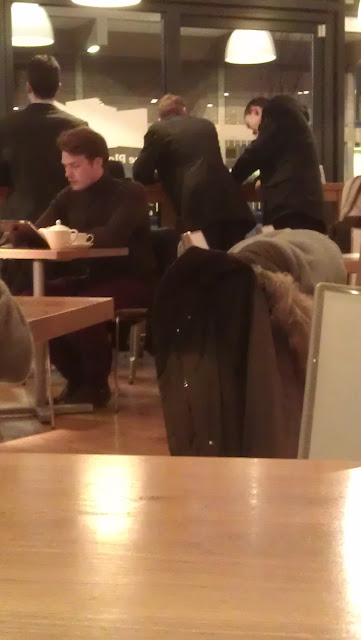 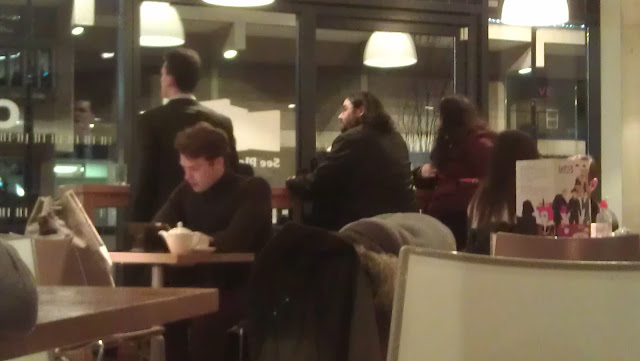 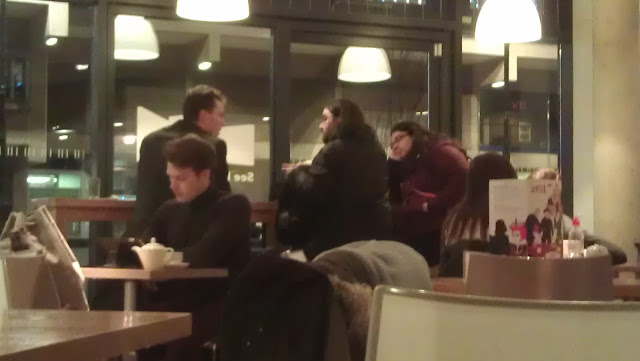 After speaking to the 'Informant', they went outside where the man was bundled into the TFT landrover. 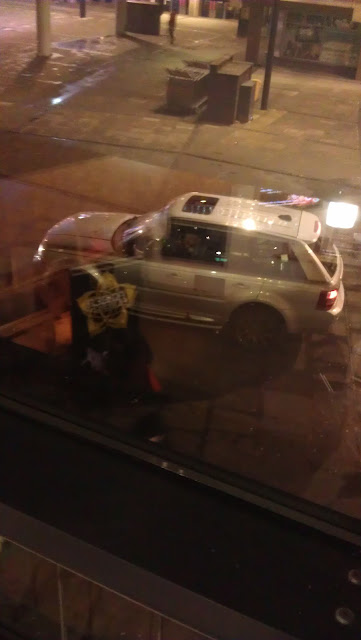 Before I left I spoke to the behatted man who handed me this... 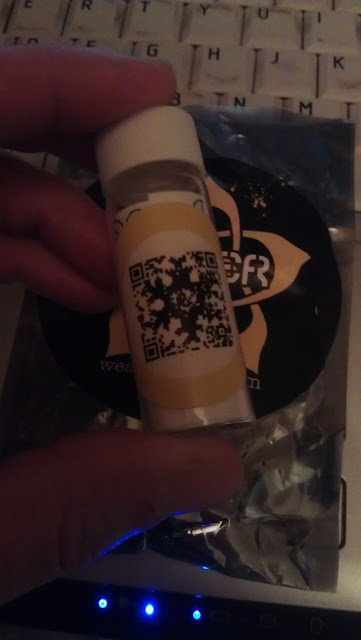 ....which contained this document that also has a quote from 'The Shadow'. 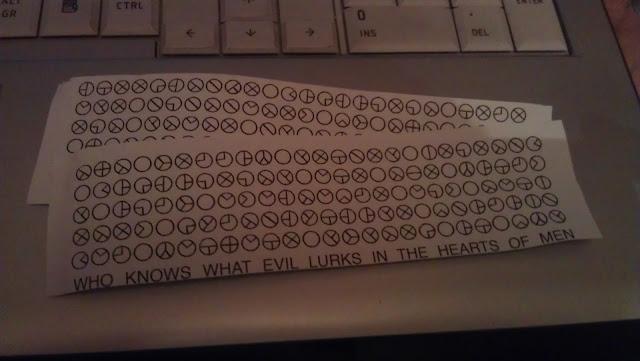 After receiving the location of the package via the node, I discretely collected it and have since pieced the shredded documents back together. See images below - apologies for the photos, my scanner needs fixing, these are still readable though. 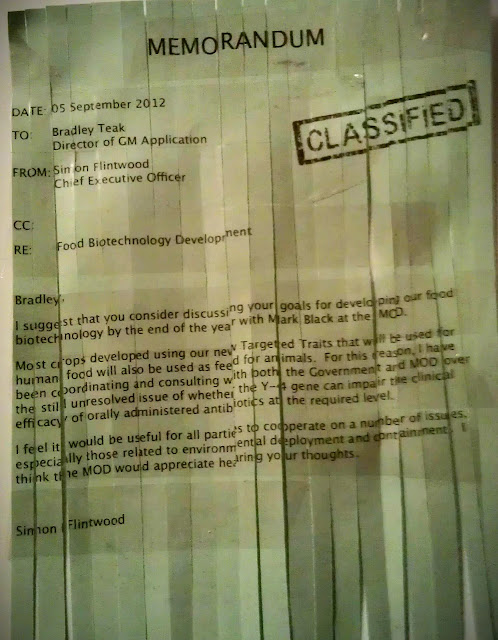 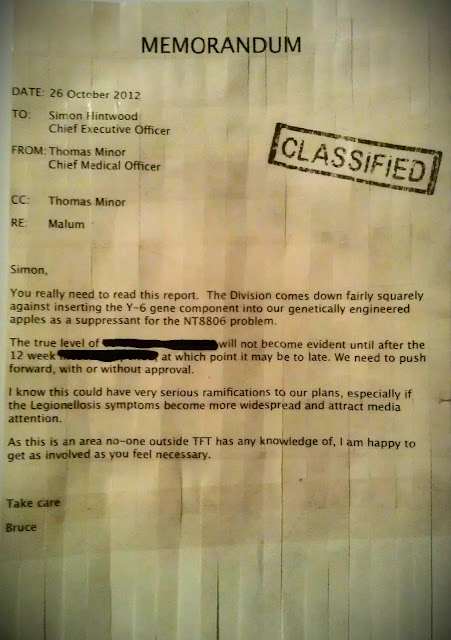 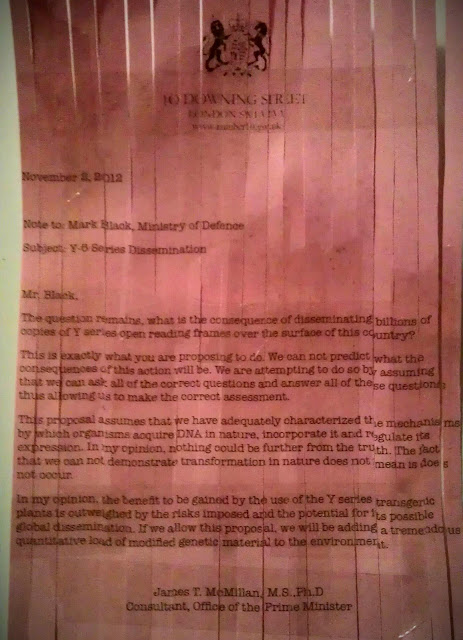 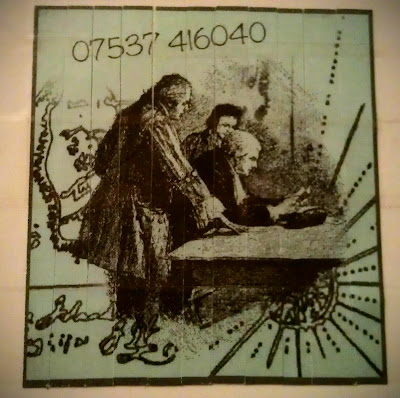 Today, I retrieved a package from a secret drop point (location shared via the amber node 29f), which contained shredded documents: 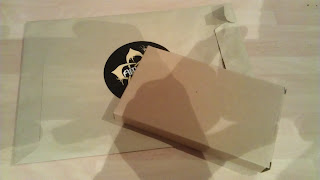 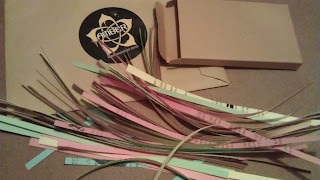 Details will be shared once they have been re-assembled. I was also discretely passed a disk by an undercover amber agent which contained two video clips.


Also at the location was a scrabble board which I believe the tile clue belongs to. In scrabble, the game starts from the centre of the board, and on this table the centre tile was missing, (apologies for bad photo, tried to take it quickly without being spotted.) I suggest this is where the 'F' belongs. 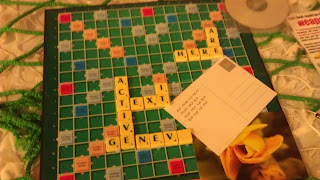 I did spot an unmarked white van at the location but didn't have time to inspect it before it left.

this blog will be used to share information with other Amber operatives. More news on this soon.
Posted by G-Dog at 10:00 No comments: